Many of the images and sites that make up the worldview of Chinese culture were begun in the Ming Dynasty. Most notably, the current and completed version of the Great Wall, the architectural style represented by the Forbidden City and the popular blue and white porcelain creations. As Nanjing was the first capital of the Ming Dynasty (the second being Beijing where another Forbidden City was built in the 15th century), many of the cultural, political and philosophical keystones of Chinese culture were hammered into place during this time. The Ming Dynasty lasted from 1368 t0 1644 rivaling and in many ways surpassing other civilizations of the world during that time.

Coming out of the long period of aggression and regime change, Emperor Zhu Yuanzhang, the founding emperor of the Ming Dynasty, ringed his newly chosen capital with a defensive wall. Slightly more than 33 kilometers in circumference ranging from 14 to 18 meters high, it is the longest city wall m existence. Upon first glance it can easily be mistaken for the Great Wall through its similarities. The now referred to Ming City Wallis a symbol for Nanjing that has survived, although scarred and beaten, through centuries of attack all the way up to the invasion by Japan in the 1930s. 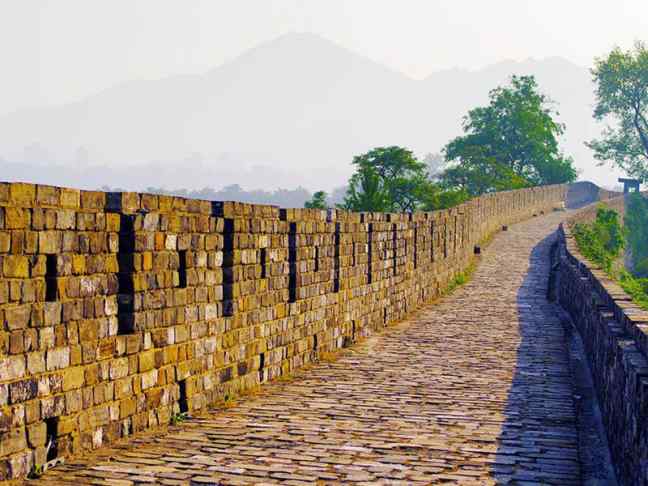 The lone surviving southern gate, the Zhonghua Gate, and the city wall offer a look into the ingenuity and progress of design to come out of the Ming Dynasty. The construction of the Zhonghua Gate along with the city wall was obviously a massive undertaking but utilized a creation of lime, water, glutinous rice and tung oil to cement the bricks in place. Tung oil is water resistant plant oil native to China. This mixture made the walls extremely resilient and allowed for one of the most unique aspects still highly visible along the surface of the bricks.

Stamped and etched into the bricks are the names of the person who made the bricks, placed them and sometimes the crew leader or foreman facing outward for every passerby to see. The idea is that should a brick fail or prove faulty then the question of who is at fault is clear. With the wall serving to protect the people no mistakes were required and if perfection in construction was not achieved the consequences were dire.

The Zhonghua Gate itself shows how much safety and military might was important in the new dynasty. The former rulers of China being the infamous and dreaded Mongols led by the great Khans, the new emperor wanted to ensure that attacks were efficient and localized. The gate was designed to hide up to 3,000 garrisoned troops who could quickly detain and then vanquish a large number of the enemy through an intricate system of locking inner gates and chambers.

Looking out from the top of the Zhonghua Gate and from behind the fortifications, the creativity springing forth from the serenity of the inner Qinhuai area can easily be seen. Here is where Fuzi Miao, or the Confucius Temple, resides. Confucius and his teachings became the foundations of how Chinese society should be governed. More than a constitution or a single doctrine, the teaching of Confucius permeated and dictated what was required to achieve a harmonious society. 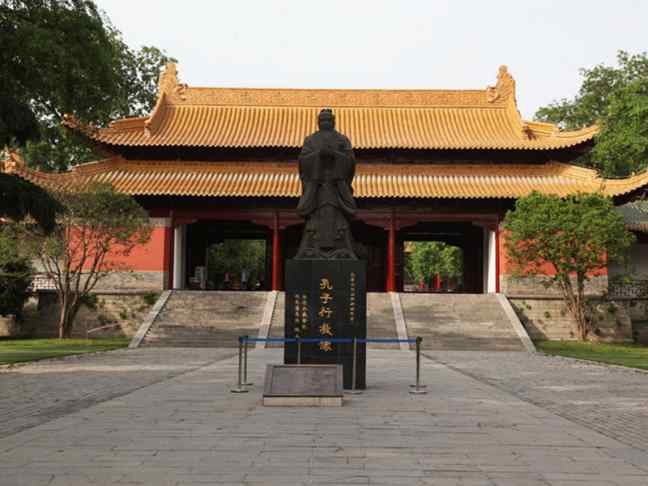 Source By: Worshiping the Sage Hall

The actual temple itself was built in the Song Dynasty, but this new era helped to foster a more widespread study and examination of Confucian ideals. So respected and important were these ideals that the selection of civil servants and officials were chosen from those with the best knowledge and understanding of these teachings. Schools and examination halls were built all over the kingdom. One of the most important was also here in Nanjing situated next to the Confucius Temple.

The Jiangnan Examination School is where anyone could attempt to put their knowledge to the test and gain the standing of scholar and in turn be part of the governing body. Where before those who achieved the level of scholar were awarded appointments of the county level or above, the selection of Nanjing as the capital gave those scholars the chance to attain imperial-level appointments. The best minds of China were flooding the banks of the Qinhuai.

The city was already home to many of the valuable and sought after crafts of the era. Nanjing was, and still is, one of the finest production centers for silk brocade, premiere quality porcelain and traditional folk arts. All of these were highly prized and traded all over the world bringing riches and traders to the city. Merchants, craftsmen and laborers filled the teahouses and courtesan homes and mingled among the scholars and literati of the day who were passing time during their examination period. A fertile blend of the working class bravado and high-class pretentiousness would spawn the classic stories such as Peach Blossom Fan and inspire Kun operas.

The mixture of wealth and a deep-seated appreciation of artistic expression can be felt all through the city of Nanjing. The best example of this can be seen sitting atop the Lion Hill in the northwest of Nanjing. Constructed on the site where the Ming Dynasty's first emperor, Zhu Yuanzhang, originally built a tower to commemorate his throne-ascending victory, is Yuejiang Tower. This modern architectural and. artistic site is a tribute to the legacy of the Ming Dynasty.

Ancient plans and writings from the time were examined and pored over by scholars so as to emulate the splendor of the time. From the dark red and green painted wooden beams to the bright imperial yellow porcelain tiles that encompass the roof, Yuejiang Tower is an almost otherworldly vision of ancient China. Inside the grandeur and attention to small detail is a showcase for Chinese artistic design and form. Even the large 500-kilogram carved mahogany throne was fit for an emperor.

Stepping just outside the main hall and the mountaintop panorama show off the great span of the one-time capital. When looking south you can trace along with your finger the Qinhuai River cutting its way through the modern city combining with the Yangtze. Turn 180 degrees and that powerful river teams with ships bringing all manner of commerce into and out of the city. You can see the old and the new churning together to create the future of the city.

However, the most awe-inspiring addition in Yuejiang Tower is the humongous porcelain mural filling the atrium and spanning nearly three floors in height. The intricately painted mural is a depiction of the seven voyages of Zheng He, the famous Ming Dynasty admiral who explored some 30 countries and several continents with his fleet of treasure ships. As the ancient capital and a major shipping port for the kingdom, Nanjing was a bustling metropolis due in part to great explorations of Zheng He.